Shibli Mohammad is a leading exponent of classical Indian dance and is renowned as a performer, teacher and choreographer, specialising in the dance form of Kathak. He is well known for his dazzling displays of body spins as his performances build to a climax.

After leaving school, Shibli attended Jahangir Nagar University and graduated with an Honours Degree in Physics – but his life was soon to take a very different turn, as he had already discovered his passion for dance and was taking lessons from Kartic Singh, Ajit Dey and Anita Dey at the Chayanat Institute in Dhaka.  Shibli was then awarded an Indian Government scholarship to train at the Bhatkhanbe Music College in Lucknow, where he was taught by the renowned Shreemati Purnima Pande.

His next move was to the Kathak Kendra in New Delhi, where he studied under the legendary Kathak exponent Pundit Birju Maharaj.

Having completed his course with distinction, Shibli returned to Dhaka and quickly made a name for himself as the most accomplished of the up-and-coming young male dancers in Bangladesh.

Ever eager to expand his repertoire, he studied for a year at the London Ballet Theatre School, receiving training in ballet and contemporary dance, as well as tap and jazz. Inspired by this experience, he developed an increasingly experimental approach to choreography and he has become known for fusing traditional and modern dance forms, for example blending classical Kathak with modern and folk dance.

Shibli was the principal male dancer at the Shilpakala Academy for many years and has performed at many major state functions. He has also represented his country worldwide, with performances in more than 50 countries, including the UK, USA, Canada, Gulf States, China, Japan and many other locations in Asia, Europe and Africa.

Shibli is a familiar figure on stage and screen in Bangladesh and, thanks to satellite TV, is as well known to Bangladeshis worldwide as he is at home. This has resulted in frequent private invitations to dance live before expatriate Bangladeshi communities in many parts of the world. He has recently gained a wider audience through the Indian channel, ETV Bangla, as one of the regular judges of the Calcutta based dance competition, Rhitur Mela, winning respect for his even-handed and authoritative judgments.

He has participated as a member of different national selection committees and jury boards, for instance on Bangladesh Television and at the Shishu Academy. He was also a member of the International Theatre Institute (ITI) committee for 2 years running.

He has also found time to perform in dance dramas televised by ETV in Calcutta, dancing with the Indian national award winning actress, Rituparna Sengupta, in productions of ‘Shema’ and ‘Shapmochon’, in celebration of the anniversary of Tagore’s birth.

Back home in Dhaka, when he is not performing or planning his next show, much of Shibli’s time is taken up with teaching. He teaches at the Nrityanchal School and also gives classes in a studio at his home.

In recognition of his outstanding achievements in the field of dance, Shibli has received a number of prestigious awards, including the UNESCO award for best Bangladeshi dancer, George Harrison Award for Dance in New York (jointly with Shamim Ara Nipa), the Jae Jae Din Award, the Bachshash Award, the Prothom Alo Award and the Lux Channel I Award, (in Sharjah). 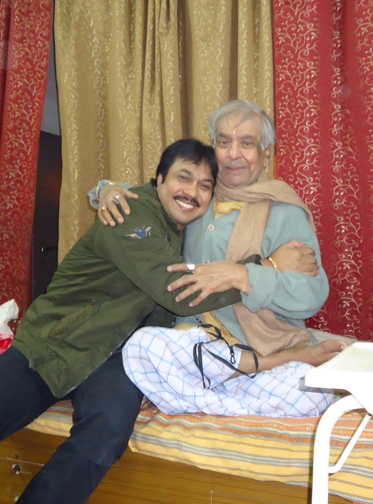